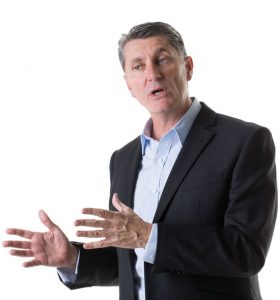 One to one coaching

Steve provides one-to-one executive coaching and mentoring programs for CEO’s, senior executives and sales teams who are committed to taking their presentations, interviewing and negotiating skills to the next level. Steve is in high demand by corporations who want the edge over their competitors during the interviewing, pitching, sales and negotiation process.

There are almost ninety individual muscles in the human face With as many as five muscles combining at any one time to produce an expression, meaning that, astonishingly, a person’s face is capable of well over 10,000 visible facial configurations which give a pointer as to what a person is thinking or feeling.

Whenever a person experiences a basic emotion, a corresponding message is automatically sent to the muscles of the face. This message sending system is involuntary and while we can attempt to use our voluntary muscular system to try to suppress it or hide it from view — when we fake a smile, even though we might be feeling miserable for instance — a small part of that suppressed emotion leaks out. All humans exhibit the same facial expressions associated with fear, anger, happiness, contempt, disgust, sadness and surprise. Interestingly enough even when we try to conceal these emotions they will often express themselves within a 25th of a second. These are just the facial expressions and don’t include all the other non-verbal cues such as gesturing, displacement behaviors, masking, concealment and blocking gestures!

This knowledge alone provides corporations with an “edge” in making the right investment decisions during meetings and negotiations.

Steve provides one to one training in the following areas:

Winning at the negotiation table

How to conduct effective interiews

How to create and deliver a killer pitch

Steve’s mentoring allows executives to exude confidence by understanding their own posturing and confidence gestures during presentations, negotiations and meetings whilst identifying negative signaling gestures such as superiority, aggression, rejection, disapproval, power, arrogance and other non-verbal and subconscious behaviors in others.

Very few people get to work with Steve on a one-to-one basis to improve their presentation and negotiation skills at such a level. Imagine having the ability to read people and influence others in presentations and business negotiations at the highest level? Well now you can have direct access to this highly sought after and valuable knowledge. Contact us directly for a personal consultation.